Note - in some browsers the appearance of the blog is corrupted. I do not yet know the cause, but hope this issue will be resolved soon!

I had planned to spend some of the morning hours at KB road on my Friday off. As it happened it was pouring down when I got up and I needed very little persuasion to return my head back to my pillow. Luckily, the weather promised to be much better the next day and at Saturday 6 AM I turned onto KB road in a highly upbeat mood.

Some bushes next to the road were fruiting and there were plenty of bulbuls around, mostly black-headed, but I also saw a puff-backed bulbul which is an uncommon encounter at KB road. After a couple of minutes the star of the morning flew in: a male black-and-white bulbul.
This first picture is really not very good. I was shooting against the light with a slightly fogged up lens. And not only that, I also still had my camera in a fixed setting from the previous night! Not very smart. It's hard to explain the anguish when failing to make the most of a perfect photo opportunity of a hard to get bird.

While waiting for the black-and-white bulbul to return, I heard a scarlet-rumped trogon singing and soon found the source.
I don't think I will ever tire of seeing a trogon, they really are stunning animals. There were also several black-winged flycatcher-shrikes around. This is one of the more common birds along KB road.
Two black magpies were making a lot of noise nearby. This is only the second time I have seen this species now on KB road.
This pygmy squirrel also showed quite well. These tiny squirrels do not measure more than 10 cm. I think this is the plain or least pygmy squirrel, and a from a little googling I just learned that this species is endemic to Borneo.
After a while another black-and-white bulbul showed up, a female this time. This species really seems to have a cunning ability to make any photographing attempts difficult. In this one the head is superbly hidden behind a leave...

The browner color suggest that this is a female. And here she is flying of again....
The black-and-white bulbul is uncommon species. KB road seems to be a relatively good area for an encounter with this distinctive bulbul and I have seen them now on several occasions. This Saturday I was lucky to not only see a male and female bird, but also this juvenile.
Finally the female showed up again and allowed some better shots. 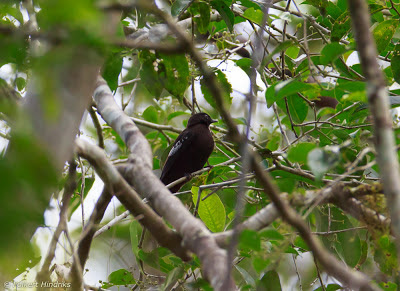 And just in time as I really couldn't stay any longer; the jazz festival in Miri was waiting, which btw was very excellent!

Folkert
I started this weblog in Panaga, a residential area in Brunei Darussalam, hence the name, where I lived between 2009 and 2014. Late 2014 we moved to Houston in the USA. I have a keen interest in nature and bird photography and use this medium to share some of my experiences.

The pictures on this weblog are compressed versions of the original photo.
Unless indicated otherwise all pictures are mine. Please do not use and/or distribute without my explicit consent.
Folkert