Note - in some browsers the appearance of the blog is corrupted. I do not yet know the cause, but hope this issue will be resolved soon!

To the mountains of Brunei!

I've been away on two excellent trips during the last two weeks. The first trip was to Bukit Pagon, the highest peak in Brunei. Brunei is most certainly not the Dutch topographic equivalent of Borneo - the highest "mountain" in Holland is only a whopping 322 meters, whereas Bukit Pagon is roughly 1850 meters high and offers some pristine montane habitat. The map, taken from wikipedia, shows the location of Bukit Pagon, at the tip of Temburong. 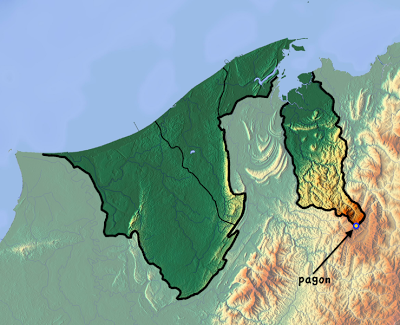 I did the climb to the summit in the beginning of the year. Most of my attention then went into the climb (a 10 hour trek, including a serious scramble to the top on the slippery slopes of fairytale-like mossy forest), though I did see some new birds. I had the feeling that some great species could possibly be hiding here and was therefore quite keen to go again, though without the climb and some more focus on the birding/photography. An opportunity presented itself on the weekend of 15 December, when 8 friends were all eager to do the summit. I gladly joined, with camera, and without the ambition to conquer the mountain again. Like last time, Haddy Sham again did an excellent job in organizing this trip. Thanks!! See also his website: http://borneotrekking.com/blog/.

The trip starts with a 4 hour 4WD drive from the Kuala Lurah border crossing through Sarawak on old and more recent logging roads. Then, a one night camp is set up around 900 meters still on the Sarawak side of the border. The area around the camp is mainly secondary forest with the old growth taken out. There are some patches of mature forest and close by on the Bruneian side it is still all undisturbed primary forest. There has been a recent scientific expedition from the Univeristy of Brunei Darussalam (UBD), still the area is very much under-explored.

When we arrived at our camp it just started drizzling which made the visibility quite poor, especially for photography. There were plenty of birds around and a quick walk down the track showed several different bulbuls, including ashy and bornean, as well as streaky-breasted spiderhunter and a couple of fairy bluebirds. During a dry spell I quickly took out my camera and managed to get a couple of pictures of the ashy bulbuls.


After dinner we went out for a short night walk. A malay civet offered some excitement. Apart from that we didn't see a great deal. Some tiny eye-shine revealed this large spider. I have no idea which species, perhaps someone knows?

The next morning the climbers set out for the top at 4 AM. As soon as they'd left I tried to get another hour or so of sleep. But by 6 I was ready to move and get some birding done. I had decided to stay close to the camp and try my luck on the hillside. As I set out very optimistically in the early morning an asian brown flycatcher flew into view. Despite of the very poor light, I managed to get a couple of great close-ups.
After some extremely poor shots the day before I finally managed to get a capture of the Bornean bulbul (Pycnonotus montis). This species used to be a subspecies of the Black-crested bulbul, but is now recognized as a separate species and a Bornean endemic. These birds were fairly common around the area where we had set up camp.

The other commoners around were some ashy drongo's and the calls of the gold-whiskered barbet were almost constantly heard, though I only saw two birds. Both ruddy and little cuckoo doves were seen flying overhead. Another lifer for me was this endemic Bornean leafbird. This female blends in nicely with the background foliage. This is the only leafbird species where the females also have a black throat.
A soaring raptor through our valley turned out to be a mountain serpent eagle, another endemic. Already on the last trip I had a strong suspicion that a serpent eagle I only saw briefly could have a been a mountain serpent eagle. This time there is not a shadow of a doubt!
I completely botched an opportunity to get a good picture of a perched Blyth's hawk-eagle by a far too eager approach. A bird flying overhead offered some small solace.

﻿At around 2 PM the climbers came back from the summit and we started our journey back to Kuala Lurah. Along the way some depressive sights of massive forest clearance.
When we finally arrived at the border we were rewarded with some great chicken-wings, washed down with an even greater tasting beer at Linggi's before heading back to Panaga.
The trip was very good though I did not see as many species as I had hoped for, but at least I got rewarded with some good new ones. If there is ever a next time I will try to get closer to the vast primary forests on the Brunei side of the mountain, as I am convinced that the more elusive species like Hose's broadbill or black oriole could all be possible there...

Big thanks to Haddy, Linggi and the crew for the perfect organization!

Finally, last week I went to KK and included a morning trip to the KNP HQ. I will post some more on that soon.

Folkert
I started this weblog in Panaga, a residential area in Brunei Darussalam, hence the name, where I lived between 2009 and 2014. Late 2014 we moved to Houston in the USA. I have a keen interest in nature and bird photography and use this medium to share some of my experiences.

The pictures on this weblog are compressed versions of the original photo.
Unless indicated otherwise all pictures are mine. Please do not use and/or distribute without my explicit consent.
Folkert